The Autonomous Republic of Nakhchivan was visited between 2 to 5 November 2013 by a high level European Council on International Relations (EUCIR) lead by the Council President-Professor Dr. Anton Caragea.

Amongst the highlights of the visit was the on the spot trip to the salt mine and health facilities of the Duzdag Health and Therapy Center recommended for treatment of a large area of long diseases.

In the amenities area also the delegation lead by Professor Dr. Anton Caragea had visited the markets of the area and the facilities for producing world famous Ordubad art crafts.

In the cultural and historical leg of the journey the European delegation had embarked in a tour of city of Nakhchivan, a city with a 3.500 years history, a on the spot excursion to Prophet Noah Tomb, visiting Heydar Aliyev Palace in the city, carpet museum, a cruise to the ancient city of Ordubad, an incursion to the Nakhchivan Shah palace and to Ashabi-Khaf mosque and had observed a classical and opera spectacle offered by the Drama Theatre of Nakhchivan.

Among the cultural and archaeological patrimony of Autonomous Republic of Nakhchivan praised by Professor Dr. Anton Caragea where nominated Momina Khatun Shrine and Huseyn Javid House Museum as land marks of a cultural trip to the region.

Also ECTT President Anton Caragea had congratulated the Nakhchivan Opera assembly that proved that high quality music and classical entertainment could be provided in any region if there is the will and the resources necessary.

Opera of Nakhchivan deserves all the plaudits and is a witness of the genius of Azeri people concluded Professor Dr. Anton Caragea.

Taking the advantage of the presence of EUCIR Council President the authorities of the Nakhchivan Republic inaugurated the new facility of Nakhchivan State University.

Also the complex includes buildings for housing students from other areas and international students and professors in residence at Nakhchivan State University.

President Anton Caragea tour the facilities, inquired about internet access and medical and food arrangements for professors and students, visited cantina areas and explored the educational rooms and spruced up new buildings of the university. 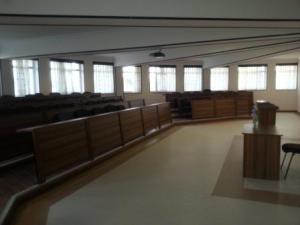 In his inaugural allocution Professor Dr. Anton Caragea express his admiration for the new Nakhchivan State University complex that is meeting international criteria’s for education, health and perfect learning environment wishing full success for the professor and students of the new university and promised that will come back to observe the progresses of the Nakhchivan State University.

The visit to Autonomous Republic of Nakhchivan was the first visit of a European cultural delegation dedicated to analyses, assess and promote the cultural potential of this extraordinary region of Azerbaijan.