International community expressed his support for the salient message of H.M. Norodom Sihamoni raising his voice in the defense of the democratic process taking place in his country.

Cambodia will have perfect transparent and democratically valid elections in July 29 2018 stated the royal message.

In front of a media slur and outrageous misinformation campaign, destined to taint Cambodia`s people and authorities determination to host free, equal opportunity and transparent elections, His Majesty King Norodom Sihamoni has the final say, closing any honest debate on the subject: The Kingdom will enjoy free and fair elections and the people of Cambodia will have the full opportunity to express their views and decision for the country direction and leadership.

The royal message writes that:

“On this occasion, I would like to solemnly call for all eligible voters to cast their ballots in order to elect national leaders for development and glorious progress in all fields”. 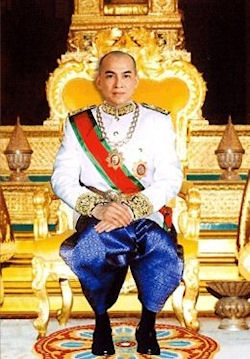 His Majesty King Norodom Sihamoni ends the debate for any honest observer of Kingdom`s politics: 2018 elections will be democratic and exemplary.

The monarch said the forthcoming election is a free, fair, and confidential election that goes with the liberal multi-party democracy, so the voters should not worry about any pressure or intimidation from anyone or any political party.

“I urge all the compatriots to exercise your rights to vote in according to your own conscience and to freely elect any candidate, any political party that you trust,” King Sihamoni said in a royal message released to the media.

Earlier the international community also praised the election preparations in regard to an outstanding PRESS CODE offering unequal access for the media and citizens to the information and enshrining election transparency as the main factor in these elections and to the regulation for international and national observers that has assured a perfect control of the elections process.

Finally, the Council of Ministers’ Press and Quick Reaction Unit has released a video announcing that the July 29 national elections would be regarded as the “best” in Cambodia’s history.