Prime Minister Abdoulkader Kamil Mohamed on Thursday raised Professor Anton Caragea, President of the European Council of International Relations, to the rank of Commander in the National Order of 27 June.

The decoration was destined to mark the nation`s gratitude for the global exertions of President Dr. Anton Caragea in supporting the principles of: independence of states, non-interference in the internal affairs of other nations, respect for national sovereignty and territorial integrity, rejection of external interferences, diplomacy based on the principles of equality among all states, of cooperation, of mutual beneficial cooperation, rejection of threats and of use of force in the international relations.

All these are the main pillars of the vision of President Dr. Anton Caragea on the international relations in XXI century that are guaranteeing for all nations, small or big the same rights and liberties and respect on international arena. 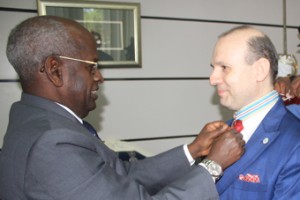 The Prime Minister raises Professor Dr. Anton Caragea to the rank of Commander in the National Order of June 27.

On April 10, the recipient President of the European Council of International Relations was in official visit in the Republic of Djibouti.

On this occasion, the Prime Minister thanked Professor Anton Caragea on behalf of the Republic of Djibouti for the award of this award and the recognition of the efforts of the Head of State, Ismaïl Omar Guelleh, and his government for the promotion and development of the cultural, diplomatic and tourism potential and assets of our country.

The decoration ceremony was attended by the Minister of Culture, Moumin Hassan Barreh, the Minister Delegate for Trade and Tourism, Hassan Houmed Ibrahim, the Secretary General of the Presidency, Mohamed Abdillahi Waïs, the Chief of Cabinet of the Presidency, Mohamed Abdoulkader Ibrahim, the Director General of the National Tourist Office, Osman Abdi Mohamed, and high level delegates of the European Council of International Relation.